A “dangerous piece of functionality” has been discovered in Microsoft 365 suite that could be potentially abused by a malicious actor to ransom files stored on SharePoint and OneDrive and launch attacks on cloud infrastructure.

The cloud ransomware attack makes it possible to launch file-encrypting malware to “encrypt files stored on SharePoint and OneDrive in a way that makes them unrecoverable without dedicated backups or a decryption key from the attacker,” Proofpoint said in a report published today.

The infection sequence can be carried out using a combination of Microsoft APIs, command-line interface (CLI) scripts, and PowerShell scripts, the enterprise security firm added.

The attack, at its core, hinges on a Microsoft 365 feature called AutoSave that creates copies of older file versions as and when users make edits to a file stored on OneDrive or SharePoint Online.

It commences with gaining unauthorized access to a target user’s SharePoint Online or OneDrive account, followed by abusing the access to exfiltrate and encrypt files. The three most common avenues to obtain the initial foothold involve directly breaching the account via phishing or brute-force attacks, tricking a user into authorizing a rogue third-party OAuth application, or taking over the web session of a logged-in user.

But where this attack stands apart from traditional endpoint ransomware activity is that the encryption phase requires locking each file on SharePoint Online or OneDrive more than the permitted versioning limit. 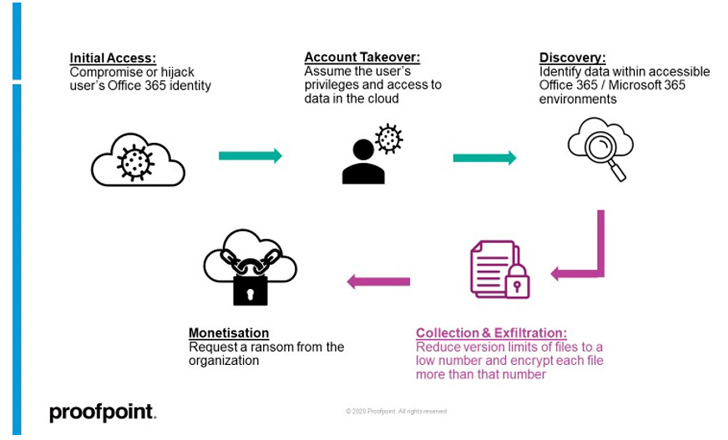 Microsoft elaborates the versioning behavior in its documentation as follows –

Some organizations allow unlimited versions of files and others apply limitations. You might discover, after checking in the latest version of a file, that an old version is missing. If your most recent version is 101.0 and you notice that there is no longer a version 1.0, it means that the administrator configured the library to allow only 100 major versions of a file. The addition of the 101st version causes the first version to be deleted. Only versions 2.0 through 101.0 remain. Similarly, if a 102nd version is added, only versions 3.0 through 102.0 remain.

By leveraging the access to the account, an attacker can either create too many versions of a file or alternatively reduce the version limit of a document library to a lower such as “1” and then proceed to encrypt each file twice.

“Now all original (pre-attacker) versions of the files are lost, leaving only the encrypted versions of each file in the cloud account,” the researchers explained. “At this point, the attacker can ask for a ransom from the organization.”

Microsoft, in response to the findings, pointed out that older versions of files can be potentially recovered and restored for an additional 14 days with the assistance of Microsoft Support, a process that Proofpoint found to be unsuccessful.

We have reached out to the tech giant for further comment, and we will update the story if we hear back.