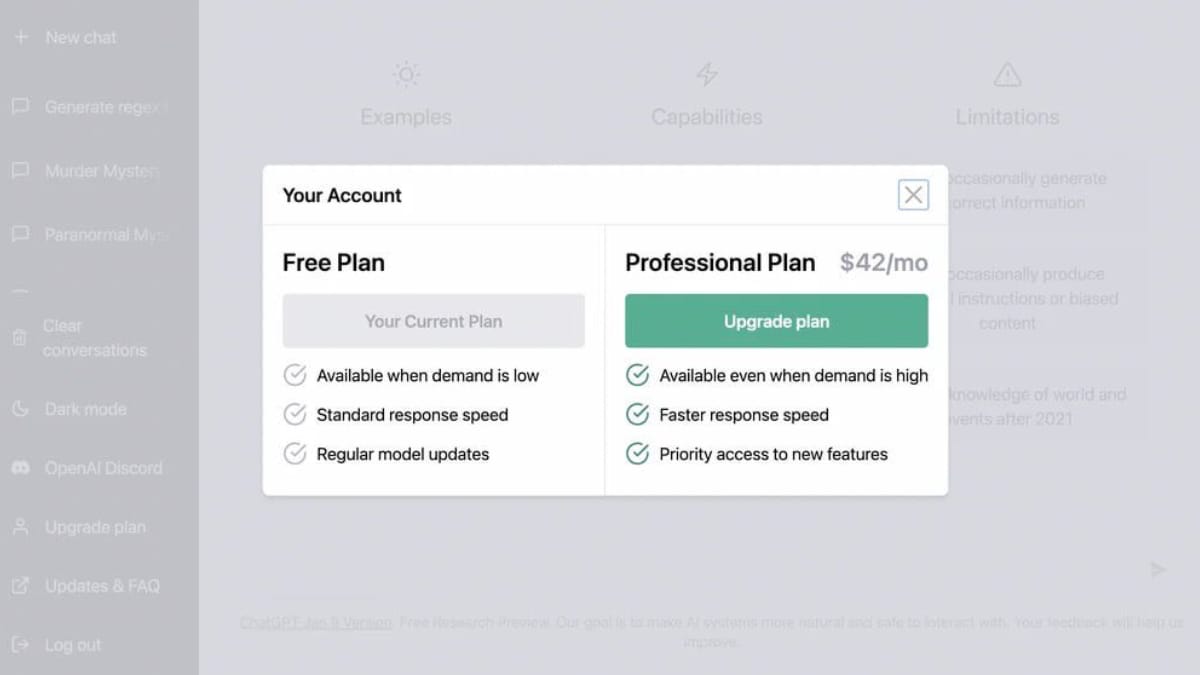 ChatGPT, an OpenAI chatbot, has reportedly begun offering a Professional Plan to its users for $42 (roughly Rs. 3,400) per month. The company has yet to make an official announcement. However, earlier this month, OpenAI posted a waitlist for a professional tier with listed benefits.

ChatGPT, the chatbot launched by OpenAI, has reportedly started offering a Professional Plan to its users at the cost of $42 (roughly Rs. 3,400) per month. No official announcement has been made by the company yet. However, OpenAI shared a waitlist for a professional tier with listed perks earlier this month. That post did not involve any specific payment terms, but the company said that they were looking to monetise ChatGPT, which stands for Chat Generative Pre-trained Transformer.

OpenAI wrote in an announcement a week ago, “We’re starting to think about how to monetise ChatGPT (early thinking, nothing official to share yet). Our goal is to continue improving and maintaining the service, and monetisation is one way we’re considering to ensure its long-term viability. We’re interested in chatting with some folks for ~15 min to get some early feedback. If you’re interested in chatting, please fill out this form (takes ~10 min to fill out).”

“Working on a professional version of ChatGPT; will offer higher limits and faster performance,” Greg Brockman, President and Co-Founder of OpenAI tweeted earlier this month along with a link for the “waitlist” to test out the upgraded version.

According to a LinkedIn post by Linas Belinas (via), OpenAI is displaying a premium plan priced at $42 (roughly Rs. 3,400) per month. This version is said to provide exclusive benefits such as no downtime, faster response time, and first access to new functionalities. However, the post does not mention whether the user was able to sign up for the plan.

Multiple users then started noting the Professional Plan option on the website at the cost of $42 (roughly Rs. 3,400). Zahid Khawaja, a Twitter user and developer who works on several AI projects, shared a video of the upgraded tier in action on both desktop and mobile and also posted a screenshot of his payment to OpenAI as proof. As Khawaja points out, the system is significantly faster than the free version.

While it is evident that some users have been able to sign up for the premium plan, there has been no official announcement from OpenAI. The pricing may be part of a test and may vary with the official rollout. Many online users are speculating it is a nod to the classic – The Hitchhiker’s Guide to The Galaxy, where the number 42 is the “Answer to the Ultimate Question of Life, the Universe, and Everything.” It is also worth mentioning that the free version of ChatGPT continues to remain functional and available for use at the time of writing this story.